Yesterday was just another normal day in our household – a package arrived in the mail addressed to Tim. This one was from one of my oldest friends who lives on the other side of the country and has only met Tim a handful of times. Her husband (who has met Tim just once) had just been on an epic journey to Normandy and the D-day celebrations and had brought Tim back a Tshirt.

This package goes along with the numerous others that have arrived over the years addressed to him – books people have found when cleaning out their Grandparents houses, copies of letters and newspaper articles from veterans my friend’s parents have happened to run into, military magazines, Anzac memorabilia, war medals from long lost relatives in the UK, pamphlets from museums people I’d met at the school gate had collected for Tim … the list goes on.

If you haven’t already guessed, Tim’s passion is military history. He reads copious amounts of non fiction books and loves military aircraft. If you ever need to know who built the engines that were on the aircraft that flew in any particular battle in any particular war, Tim’s your man.

It still astounds me that this little boy, whose greatest difficulty was (is?) socialising and communicating, endears himself unknowingly into so many people’s hearts and minds through his pure and innocent quest to know everything he can about history and war and planes.

We’ve always encouraged his “special interests”. It was Thomas the Tank Engine for many years and that was all fine but I must admit we were relieved when he moved onto airplanes. For a few years, every photo we have of Tim is with a plane in his hand. He carried a plane with him all the time, and we had stashes of them everywhere to ensure there was always some on hand in case there was a meltdown about needing one.

He began to learn to read, and of course as with everything he did he didn’t just start to read Dr Seuss books, he began to read non fiction aircraft books and from those developed a great passion for old military aircraft. It also helps his father, uncle and grandfather are pretty interested in military aircraft too and were pleased with an excuse to indulge themselves in boys’ weekends away at Air Shows where they could see the old planes fly – all in the interests of keeping Tim happy of course.

His military aircraft passion then led him to connect with the ex leader of the Air Force roulettes (a brother of a friend of my husband’s). More recently at an air show he met another of my oldest friend’s brothers, who took Tim into the cockpit of his rare and restored “Conny” after he’d heard all about Tim from my friend. We’ve never met these people, but Tim’s reputation precedes him.

I knew that Tim’s angels were really by his side when he was aged 9 and his teacher gave us a flyer for a new club starting in our suburb at the local RSL. It was for the Junior Anzac Club and it was for boys aged 9-12 who were too young for cadets but who had an interest in Australian military history. There was only one of these clubs in Australia and it was 3 minutes from our house. If ever there could have been a club designed specifically for TIm it would have been the Junior Anzac Club. It gave him years of pleasure – he went every single week, even when he was sick. He met veterans from all different wars and armed forces, visited army bases and cenotaphs in several cities and told us that the old people he met at the RSL were “the nicest people I’ve ever met”.

Our holidays became strange adventures that took us to some of the most remote places ever as we visited aircraft museums he’d researched. Last year we all went to the USA. Did we go to Disneyland? No this is Tim we’re talking about here! Try Kennedy Space Centre, Smithsonian Air & Space museum, the Intrepid aircraft carrier museum. Oh and on the way home at the end of the 16 hour flight from Dallas, Tim got to go into the cockpit with the Qantas crew and sit in the pilot’s seat and have a photo with him. Of course he did. 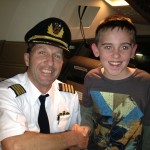 Tim’s now just months away from being able to join the Air Force cadets. He describes himself as a “military enthusiast” and has plans to work in the Imperial War museum in the UK (we haven’t been there yet but something tells me we probably will in the not too distant future). We’re planning another trip to the US next year with Pearl Harbour being the big drawcard. And Tim has written his first book which is a novel based on the events of the Battle of the Somme. There are two more in the pipeline (one based on D-day and the other based on the Afghanistan war). Being an author is the other thing he’d like to do when he grows up.

He’s nearly 13 now and is at mainstream school and these days he spends a bit more time playing Minecraft and watching The Simpsons, but his first love and great passion is still with him. I’m so grateful for the wise people who advised me to indulge his interests and develop them – they have become such a huge part of the amazing boy Tim is today, and were the reason we met so many beautiful and kind people who have touched our lives.

To have a look at Tim’s book Mud of the Somme, you can click here.

To read our family’s journey in my recent book No Cows Today, you can click here