Today I let my boy fly.

I put him on a plane as an Unaccompanied Minor to fly by himself to Sydney to stay with his grandparents for a few days.

This only came up as an option last week when we were talking with my Mother In Law and I said I wished she lived closer so she could look after Tim for a few days while I was tied up with something else. Tim said he’d fly by himself to go and stay with her, he told me he was ‘game’. So we did it. We booked him.

I’ve had a few anxious moments about the whole thing, but what’s the worst that could happen – I had to go and get him? He wouldn’t get on and we’d have to just drive home?

We did some role plays, I checked and double checked with my in-laws about the food and the schedule and I trusted it was going to be OK.

This morning he woke up so excited. As the day wore on it was “excitement and nerves” and then ‘butterflies in his stomach”. It all went off without a hitch. This afternoon he presented his boarding pass to the gate, walked out to the plane with the steward and with a big wave and smile he was off!

He didn’t see my tears through the smiles and waves, no way. As well as being scared, I was so much more. I was so proud, I was so brave and I was almost disbelieving. Here was the little boy who I was told to put in Special School. The little boy who was still pooing in his pants when he started school. And he was doing this! He was doing something so brave, something that many of his NT peers would never do. But all that plagued me was the memory of how things had been. The hopelessness of where we’d come from. It was so raw and consuming. The years of us not being able to do the same things as our friends cos he wasn’t up to it. The modifications, the embarrassments of so many social situations he didn’t understand and was overwhelmed by, the questions that hovered about his future.

And I had to stop. I have spent the past 9 years of my life trying to “fix” Tim – not to change who he is but to get him to a point where he can function in this world without being overcome by it. To the point where he’s capable and happy and independent. And he’s there. He’s there! He’s doing it and so much more. But all that came flooding back to me was “what if he can’t”. We had so many years of “can’t” that it’s sort of embedded in me.

But he CAN. And we both took a huge leap today. I put my faith in this amazing little boy, this little boy who was so lost and helpless and had such an uncertain future. And I put my faith in myself as his mother, that hard as this was (and it was so bloody hard to watch him walk onto that plane without me), it was the right thing for him.  And he had complete faith in himself that he would be ok, he never doubted it for a minute.

And that’s when it hit me – that if I kept us in the “cant’” and clipped his wings, he’d never be able to fly. It was time to let that go, and let us go forward as what he “can”.

I spoke to him tonight and asked him would he recommend flying as an “Unaccompanied Minor” and
he said “Yeah, it’s great if you’re up for it”. 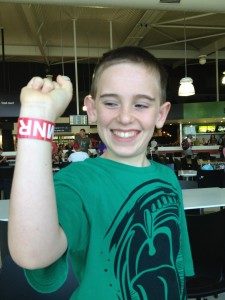